"March," Geraldine Brooks' novel that imagines the life of the fictional father in Louisa May Alcott's "Little Women," was awarded the 2006 Pulitzer Prize for fiction on Monday. 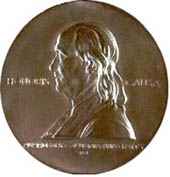 For the first time since 1997, the Pulitzer board declined to award a prize for drama.

Brooks depicted the life of John March, the father absent for most of Alcott's famed novel of four sisters growing up in Massachusetts during the Civil War.

She beat finalists including E.L. Doctorow, whose "The March," the fictionalized account of Gen. William Tecumseh Sherman's brutal conquest of the South during the Civil War, had won the National Book Critics Circle Prize.

David M. Oshinsky was awarded the history prize for "Polio: An American Story." The prize for general nonfiction went to Caroline Elkins for "Imperial Reckoning: The Untold Story of Britain's Gulag in Kenya", reports AP.

According to Reuters, the Pulitzer Prize, the top U.S. journalism award, went to the Times-Picayune "for its heroic, multifaceted coverage of Hurricane Katrina and its aftermath, making exceptional use of the newspaper's resources to serve an inundated city," said the statement by the Pulitzer Prize Board.

The Times-Picayune also won the Pulitzer Prize for Breaking News Reporting for its coverage of Katrina. The 90th annual prizes were announced at Columbia University.

The New Orleans newspaper's offices and plant were flooded, and many of its staffers were left homeless when the levees broke during the August 29 storm. Much of the staff was forced to evacuate the city.