Man gets 10 months for scheme to sell forged Rembrandt in U.S.

A man who posed as a member of the Saudi royal family and tried to sell a forged Rembrandt painting was sentenced Tuesday to five months in federal prison and another five months of home confinement. 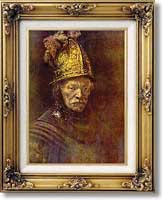 Man gets 10 months for scheme to sell forged Rembrandt in U.S.

Majed A. Ihmoud, 53, of St. Charles, Missouri, pleaded guilty in October to conspiring to commit mail fraud for his role in the fake Rembrandt caper.

In the fake art scheme, Ihmoud dressed as a sheik and took a forgery of the "Man With the Golden Helmet," long believed to have been painted by Dutch master Rembrandt van Rijn, to a St. Louis hotel on Aug. 12, 2004. He expected to sell it for $2.8 million (Ђ2.28 million).

"He said he had a Rembrandt for sale that had come out of the Middle East," said Robert Wittman, the Philadelphia-based senior investigator on the FBI's art crime team.

The buyer was actually an undercover FBI agent, Wittman said.

On Tuesday, U.S. District Judge Richard Webber also ordered Ihmoud to repay the government $1,500 (Ђ1,220), the amount an undercover agent gave him as a down payment for the brass doors.

Last month, a Wisconsin woman pleaded guilty to her part in both of Ihmoud's schemes.

Marilyn Karos, 65, of Whitefish Bay, Wisconsin, pleaded guilty to conspiracy and mail fraud and is scheduled to be sentenced May 31. She is already serving a prison term for possessing stolen art.

The real "Man With the Golden Helmet," which hangs in a Berlin museum, is likely not a Rembrandt either. In 1986, art experts concluded that an unknown artist in Rembrandt's company had painted it, reports AP.