Apple Corps Ltd. is like a doting parent when it comes to The Beatles, looking after their interests and promoting their recordings, but it also makes sure no one tries to bully the Fab Four and straightens out anyone who messes with the band's legacy. 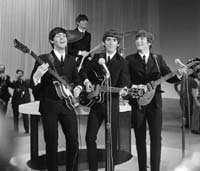 The company is in court again this week with Apple Computer Inc. over the iTunes Music Store, the latest front in a long-running dispute with the U.S. company over the fruit logo.

"They regard the Beatles as their four boys John, Paul, George and Ringo so Apple Corps looks after their music," Keith Badman, a Beatles expert and author, said Friday.

"You don't get the Beatles' version of Penny Lane being used in a cheap advertisement. They make sure the Beatles' recorded music is not damaged, and that's a good thing."

On the surface, it may appear that Apple Corps set up by the group in 1968 and still owned by Paul McCartney, Ringo Starr and the widows of John Lennon and George Harrison is simply an ever-alert watchdog, growling whenever anyone approaches the Beatles' property.

But the company is also responsible for approving merchandising and licensing for the group, as well as protecting the company's valuable apple trademark.

Most recent is the lawsuit at London's High Court, with Apple Corps seeking to force Apple Computer to drop its logo from the iTunes Music Store and pay unspecified damages. The California-based company is fighting the suit, saying a 1991 agreement between the two Apples allows them to distribute entertainment content.

Apple Corps has also battled with EMI Group, which releases the Beatles' recordings under the Apple label, over royalties. It is equally vigilant about protecting its territory in other spheres, filing lawsuits on everything from the Fab Four's images on postage stamps to the stage show "Beatlemania."

Who owns what is a complex issue. While EMI releases the Beatles' albums, the publishing rights to words and music of 251 Beatles songs are owned by Michael Jackson and Sony/ATV Music Publishing.

No one at Apple Corps or their public relations firm was available for comment Friday.

The company is also instrumental in continuing The Beatles' popularity. They were behind the release of the 2000 hit album "1", which featured hits as diverse as "She Loves You" and "Hey Jude."

"Considerable use" has been made of the band's repertoire, lawyer Geoffrey Vos told the British High Court this week, noting the band's popularity remains high, as sales of that album topped 24 million.

Operating out of offices in a tony central London neighborhood, Apple Corps keeps a low profile at least on the Internet. Their Web site is just one page, with the company's name, e-mail address and telephone number. When a caller to the company is put on hold, the music keeping them occupied is, of course, The Beatles, reports AP.