The home of the King of Rock 'n' Roll joined the homes of past and present U.S. presidents in becoming a National Historic Landmark Monday. 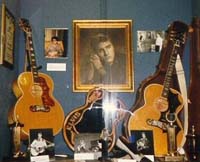 Graceland, where Elvis Presley died in 1977, joins the White House, Mount Vernon, Monticello and the Alamo in receiving the country's highest designation for historic properties.

"It would be difficult to tell the story of the 20th century without discussing the many contributions made by this legendary, iconic artist," Interior Secretary Gale Norton said during a ceremony at Presley's famous Memphis mansion.

"It didn't take Americans and the rest of the world long to discover Elvis Presley," Norton said, "and it is absolutely clear that they will never forget him."

Presley's former wife, Priscilla Presley, said Graceland, which has been on the National Register of Historic Places since 1991, meant as much to Elvis as it does to the millions of fans who have visited the home and his grave there.

"To him, having Graceland also was a tangible symbol of how far he had come from his very humble beginnings," Presley said.

Lisa Marie Presley, the daughter of Elvis and Priscilla and the sole owner of Graceland, said that fans all over the world have the opportunity through Graceland to share in her family's memories. More than 600,000 tourists visit the home each year, one of the five most visited home museums in the U.S.

"This landmark designation comes purely due to the fact that the legendary Elvis Presley called Graceland home," his daughter said. "It's a significant statement about how much my father has meant to the world and it only makes me prouder of him."

Fewer than 2,500 locations are designated as National Historic Landmarks across the United States, reports AP.