Passion comes in many forms. For hundreds of visitors to Cuba this month, it's brown, rolled and good with brandy. 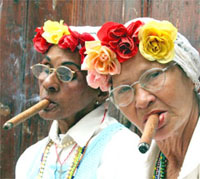 Cigar fanatics, deterred by neither money nor distance, travel across the world and pay thousands of dollars to experience the supreme stogie at its source. Those making the pilgrimage to Cuba for the annual Havana cigar festival say the smokes bring them pleasure, peace and, often, big bucks.

"This is my life," said Jimmy Ng, a Malaysian who left the travel business to become a cigar merchant some 10 years ago.

Ng, 46, spends most waking moments devoted to his new trade. He owns hundreds of books on cigars, and smokes from five to seven stogies a day.

At his La Casa Cubana in Singapore, he only sells Cuban cigars "I'm a purist," he says to a clientele that is 75 percent foreign, including officials and businessmen from Indonesia and Thailand.

Ng started smoking cigars when he was in his 20s, for "status" and to attract women. "But after five or six years, you get the right crowd, and you learn to really appreciate cigars from the brothers, the other aficionados," he said.

Ng, now married and a father, meets with a group of 30 friends every month in Singapore for a cigar dinner.

"Even with the SARS outbreak, there we were, still puffing away. We believe cigars actually give you immunities," he laughed.

Extolling such virtues is common among fanatics. Frenchman Guillaume Boudin says cigars helped him quit smoking cigarettes. He considers it a form of meditation.

"I know if I'm going to smoke a cigar, I have to take time to do it properly," he said. "It really clears my mind, and let's me come up with ideas and answers to problems."

The aficionados in Havana scoff at those who throw down large sums of money for cigars but don't know how to smoke them, reports AP.