Rolling out Hollywood's route of royalty, all five nylon tons of it 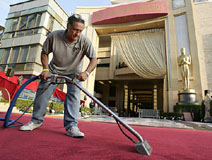 Rolling out Hollywood's route of royalty, all five nylon tons of it

And for the record, this most famous of showbiz red carpets is actually a secret shade of cayenne specially formulated to academy specifications. It's more burgundy than red, but plays red on TV.

The carpet arrived at the Kodak Theatre before dawn on Wednesday, all five nylon tons of it, direct from American Turf & Carpet in suburban Cerritos, Calif. Company owner Walter Clyne was on hand to ensure a smooth rollout.

"No high-profile person is tripping on my watch," says Clyne, a burly guy with a buzz cut and the exclusive supplier of Oscar's regal rug for the past 10 years.

One of Clyne's crew, operating a forklift equipped with a long rod called a carpet pole, pierces each 300-pound (135-kilogram) carpet roll and lifts it off the truck. Workers in matching blue T-shirts some wearing back braces, others with knee pads use metal wheelbarrows to haul the rolls into position.

By Sunday night the grunts and groans of Clyne's crew will be replaced by the glitter and glamor of famous feet as they make their way to the 78th Annual Academy Awards through a gauntlet of screaming fans and clamoring journalists.

The carpet of dreams' long journey to Hollywood begins in Dalton, Ga., where it's woven together in a natural shade of white. It takes about five days to dye it the proprietary Oscar shade, which veteran carpet queen Joan Rivers describes as "Nancy Reagan red that wonderful red with a little blue in it", reports AP.

The Academy Awards will be handed out in Hollywood on 5 March. Now in its 78th year, the ceremony has long fascinated movie fans with its mix of glamour, suspense and surprise.

According to the most recent figures from movie tracking firm Box Office Mojo, the five Best Picture nominees have combined to sell only $229 million worth of U.S. tickets. Last year's five nominees had grossed about $345 million before the Oscars. And the 2003 Best Picture contenders had already grossed more than $700 million...with more than half of that coming from Best Picture winner "The Lord of the Rings: Return of the King."

In fact, this year's nominees have been the least successful since the 1986 contenders, which generated only about $200 million leading up to the big night.

As a result, many entertainment insiders are predicting that ratings for the March 5 Academy Awards telecast will be lackluster...despite the draw of popular "fake news" guy Jon Stewart as host. The conventional wisdom is that people are most interested in the Oscars when big movies that they saw are nominated. But this year's two big favorites -- "Brokeback Mountain" and "Crash" -- grossed only around $130 million combined, or about a third of the take of last year's box office champ "Star Wars: Episode III- Revenge of the Sith."

Some critics have grumbled that box office hits like "Batman Begins" and "King Kong" were Best Picture-worthy and that nominating movies like them would have shown that the Academy was more in touch with the average moviegoer, reports CNN International.