It's an unexpected twist for the best-selling conspiracy thriller "The Da Vinci Code" the authors of a book about the Holy Grail heading to court Monday in a lawsuit against the book's publisher for breach of copyright. 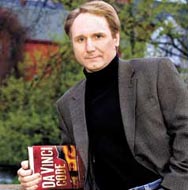 Michael Baigent and Richard Leigh, authors of the 1982 nonfiction book "The Holy Blood and the Holy Grail," are suing publisher Random House over the allegation that parts of their work formed the basis of Dan Brown's 2003 novel, which has sold more than 40 million copies.

If the writers whose work claimed Jesus married Mary Magdalene, that the couple had a child and that the bloodline survives succeed in securing an injunction to bar the use of their material, they could hold up the scheduled May 19 release of "The Da Vinci Code" film, starring Tom Hanks and Ian McKellen.

Sony Pictures said it planned to release the film as scheduled.

"This lawsuit is not about the movie, and we are proceeding with our plans," said Jim Kelly, senior vice president of corporate communications at Sony Pictures Entertainment.

Brown, who is expected to give evidence next week, sat attentively before a judge in London's High Court, a short walk from Temple Church the place of worship founded by the Knights Templar which figures in his novel.

Brown, was "interested in taking, and took, short cuts rather than doing any of the work himself," Jonathan Rayner James, lawyer for Baigent and Leigh, told the court.

Baigent, born in New Zealand, and Leigh, originally from the United States, are suing Random House, which also published their book. The company denies the claim and chief executive Gail Rebuck said in a statement she believed the lawsuit was without merit.

The book's third writer, Henry Lincoln, is not involved in the case.

James said his case was not attempting to "stultify creative endeavor," or to claim a monopoly on ideas or historical debate, but to prove Brown had "relied heavily" on the earlier work, published in Britain in 1982 and the following year in the United States, reports AP.