Grandma Luge makes it onto results list, but not as a starter

Grandma Luge ended her Olympic career with a partial victory at her sixth Winter Games. 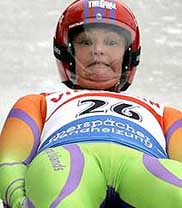 Grandma Luge makes it onto results list, but not as a starter

The 52-year-old luger, whose real name is Anne Abernathy, will be officially recorded on the results lists at the Turin Games despite being prevented from starting her event because of an injured wrist.

Abernathy filed an application with the Court of Arbitration for Sport to be reinstated on the Olympic starters list.

At a Turin hearing Friday in front of a three-man panel of CAS arbitrators, Abernathy reached an amicable agreement with the International Luge Federation, CAS said on its Web site.

Her name will not be reinstated on the starters list. But the FIL agreed to ask the International Olympic Committee to place her on the results list as "DNS" or Did Not Start.

"It was never in dispute that I was an Olympic competitor," Abernathy said. "I just wanted it in the records."

Abernathy crashed during a training run Sunday and broke her right wrist, prompting race director Marie-Luise Rainer to remove her from the two-day event.

"I just wanted to be recognized as having worked hard to get here," Abernathy told The Associated Press by telephone.

Even as a nonstarter here, Abernathy still qualifies as having competed at her sixth Olympic Games. Her first was at Calgary in 1988.

Abernathy, represented by Turin-based attorney Christina Martinetti, agreed Friday that Rainer was right not to let her start on the perilous Cesana track  where several women lugers wrecked Monday and Tuesday.

Racing would doubtless have placed Abernathy in danger.

Abernathy says she was presented with a gift from her fellow racers: the start number 31, signed by all the women's lugers.

"It made me feel good," Abernathy said. "Michelle Despain of Argentina wrote something nice. She wrote: 'Thank you for your example, Anne."'

Abernathy intends to carry the U.S. Virgin Islands flag at the closing ceremony in one hand; and her cherry-red racing helmet in the other  in honor of women over 50.

"Women of 50 all over the world can participate in life," Abernathy said. "I'm passionate about my sport ... I'm not over the hill."

Abernathy has retired from Olympic competition but may race at next year's world championships at Igls, Austria before retiring from all international competition, reports AP.