Trends can be interpreted in different ways. Bows have been big at New York Fashion Week, which continues fall previews through Friday, but one designer puts it around the neck, another on the waist. 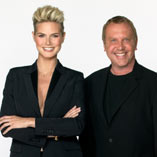 Same goes for black there are so many ways to wear it as well as for skinny pants, blouses and loose dresses. On Wednesday, Michael Kors and Peter Som put their spin on the looks for fall.

Michael Kors: Kors must watch a lot of old movies, particularly love stories. And if Ali MacGraw is in them, that's even better. Kors has made no secret that MacGraw in her 1970s heyday is a fashion icon from whom he draws endless inspiration and that was proved again with his Wednesday preview.

These were clothes for a woman who prefers a casual chic style to the more formal dress that her friends will be wearing next fall.

Kors opened the show with a long navy and maroon rugby-stripe dress worn with a navy duffle coat, and closed with a breezy chiffon halter gown adorned with loops of crystals. In between, he showed a short-sleeve blouse and skirt in dark green tartan plaid, a popular print, and a green chiffon paisley scarf skirt with a dark brown leather jacket that already looked broken in.

The skinny stretch jean tucked into boots and paired with a navy sweater coat was the rare sighting of denim on the runway. Kors did, however, touch on other trends, including tie-neck blouses, chunky knits and knickers, reports AP.