Ivan (Vanya) Fokin, a 12-month-old boy, who was rescued from under the rubble of the collapsed apartment building in the city of Magnitogorsk, Russia, was discharged from hospital in Moscow. The boy and his mother left the hospital on February 14. Chairman of the Research Institute of Emergency Pediatric Surgery and Traumatology, Leonid Roshal, ER and EMERCOM personnel congratulated the Fokins on the recovery of the little boy. 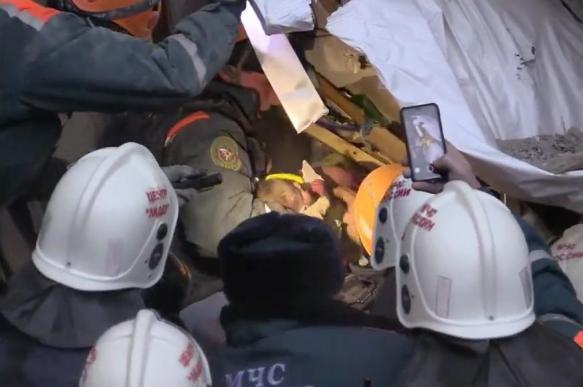 "The whole country was helping Vanya all this time. It was massive teamwork - it was rescuers, doctors and many other people who made the boy's recovery possible. I'm happy to see him in his current healthy condition - one does not need anything else in life," Mr. Roshal said.

The boy's father, Yevgeny Fokin, said that his family was returning to Magnitogorsk on February 15. Earlier it was reported that the family already has a new two-room apartment instead of the one that they lost as a result of the apartment building explosion. Doctors will be accompanying the boy during their flight from Moscow to Magnitogorsk. The Magnitogorsk Children's Hospital will draw up an individual rehabilitation plan for the child.

The ten-storey apartment building collapsed in Magnitogorsk on December 31, 2018. Ivan Fokin was recovered from under the rubble in more than 30 hours after the tragedy. He was rushed to the Research Institute of Emergency Pediatric Surgery and Traumatology in Moscow, where he spent the night in the intensive care unit.

At the time of his evacuation to Moscow, the child was diagnosed with a closed head injury, internal injuries, bone fractures, frostbite and general hypothermia.

Pyotr Gritsenko, an EMERCOM representative, told reporters that the boy was pressed against the mattress of his crib and covered with a blanket. His head was safely clamped between parts of a wooden closet, and the position of the baby's body was good enough to let the child stay alive for long. The baby spent as many as 35 hours under the rubble, the official said.

Politics
Elections in Russia deliver most predictable results
Asia
Recep Erdogan is coming to Russia. What for?
Asia
The rise of Taliban and Taliban-ism