Posters for the play "Adam and Eve. Life after Paradise" with pictures of dancers Arsen Aghamalyan and Oksana Vasilyeva were banned in the city of Tver in Central Russia. 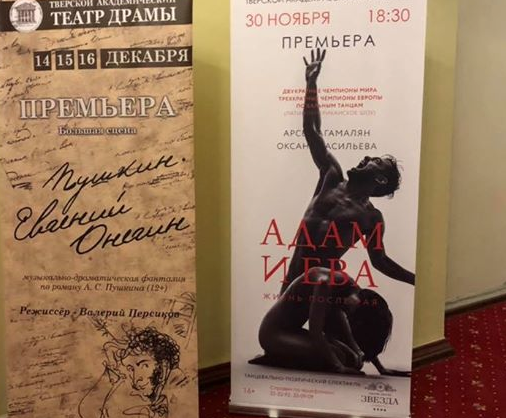 Dancers Arsen Aghamalyan and Oksana Vasilyeva are multiple European and world champions in sports dancing. Their first show in the Tver Drama Theatre on September 26 was a great success. The second show is to take place on November 30.

The posters to the dance show are marked "16+" for viewer discretion. The photograph on the posters depicts the dancers stark naked striking a pose from their dance show. However, even though Arsen Aghamalyan and Oksana Vasilyeva are depicted naked on the photo, there is absolutely no nudity in the picture. Strangely enough, the poster did not confuse anyone two months ago, when the dancers gave their first show in the city.

However, Arsen Aghamalyan wrote on his social webpage that the committee for cultural affairs of the Tver region received a complaint from local residents who claimed that there was a picture of naked people displayed in the Tver Drama Theatre. On the basis of this complaint, the committee issued an order on November 13 to remove the posters that supposedly corrupt the morality of theatre-goers.

Arsen Aghamalyan was very surprised to know that officials with the committee for cultural affairs ddi not even try to look into the issue, but simply ordered to remove the posters. "What if some inadequate people write official letters to museums complaining of nudity? Will officials decide to put down all those paintings and statues not to corrupt people's morality?" the dancer wondered.

The dancers decided not to make a scandal of the incident. They will simply replace the posters with those that will not display any images, but will contain only text information on them.