On September 28, Apple started selling its new iPhones in Russia. The official start of the sales ended the story about the line outside an Apple's retailer store on Tverskaya Street in Moscow. 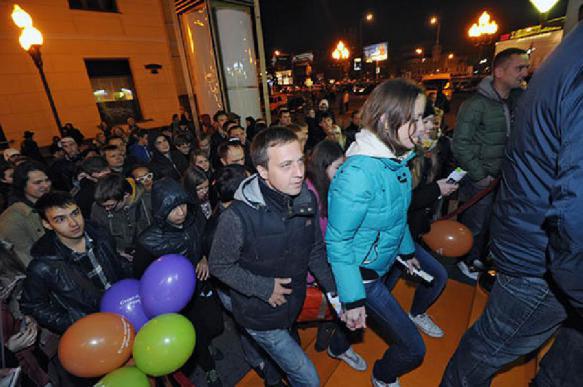 It appears, though, that the man was simply standing in the line for a few days in an attempt to sell his place there to someone else, but failed.

When the store on Tverskaya Street opened, the first eight customers simply left the queue. It just so happened that the first customer of a new device was the ninth person in the line. The people were standing in the line in a hope that someone would pay them good money for the right to become the first owner of a new iPhone in Russia.

In Moscow, people started joining the queue a week before the official start of sales of the new phones in Russia. Soon afterwards, one could finds curious classified ads on the net, where people were offering their places in the line on Tverskaya Street for a lot of money. The first person in the line posted an ad saying that he was ready to sell his place for 500,000 rubles ($7,700).

One of those in the line told reporters that the people in the queue were aggressive and angry. One of the fans of the US-based corporation brought a war veteran to the store claiming that veterans had the right to queue-jump to be the first.

It is worthy of note that the weather in Moscow has been not very pleasant recently. Daytime temperatures barely climb above 10 degrees Centigrade, and the people outside the store had to endure cold, strong wind and drizzling rain non-stop.