Will Smith tells of his trip to Russia in a video

Will Smith, an American actor and musician, has published a video on his YouTube channel, in which he told the story of his trip to Moscow during the 2018 FIFA World Cup. 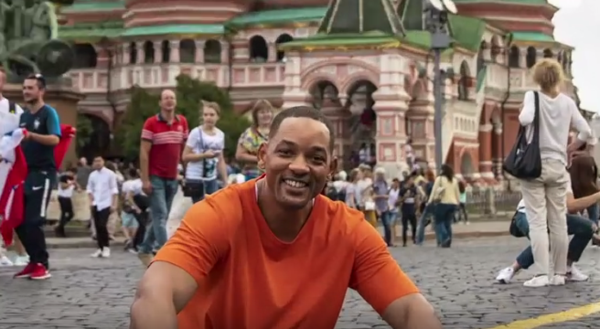 The video titled "How I Lost My Voice Before the World Cup" tells the story of Smith's trip to Russia, where he appeared as a musical guest to perform the official song of the tournament - "Live It Up." Will Smith performs the song together with Nicky Jam and Era Istrefi.

When traveling around Moscow in a car, Will Smith says that his quest would be to find black people in Russia. When he asked the question to his Russian driver, the latter was puzzled and could only say "I don't know where they actually are, but we have them."

The actor also walks around Red Square, where people recognize him instantly and start screaming his name in excitement. The video shows the actor as a very fan-friendly and bubbly person, which is probably one of the reasons why so many people around the world love him.

The video also shows Will Smith having fun in a night club, rehearsing for the performance, drinking tea in the dressing room and giving a press conference.

"It was really special World Cup. Great talents, beautiful people, new friends. This is just pure happiness. Can I ask for more than that? Spasibo!" Will Smith says in the end of the video.