Russians gassed by their own garbage near Moscow

Fifty children from different schools in the town of Volokolamsk near Moscow turned to the central district hospital for medical assistance complaining of general uneasiness. Five children were hospitalised with symptoms of poisoning. It is believed that the poisoning occurred as a result of the emission of landfill gas on Yadrovo landfill site on Wednesday morning. 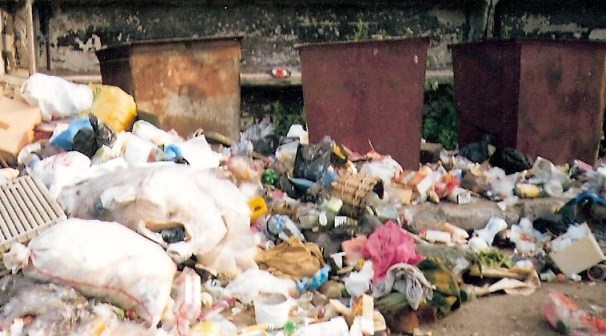 The children complain of nausea and dizziness. One boy had high blood pressure and four children were hospitalised after their parents insisted profound medical examination was required. In total, more than 180 people requested medical assistance as a result of the incident that took place on the landfill site. All of them had similar symptoms - dizziness, weakness, nausea, disorientation.

Soon afterwards, residents of Volokolamsk started gathering near the Central District Hospital. The head of the Volokolamsk district, Yevgeny Gavrilov, and the Governor of the Moscow region, Andrei Vorobyov, arrived to talk to participants of the meeting near the hospital.

The situation was explosive, but the mood in the crowd turned spikiest after the officials arrived. Gavrilov and Vorobyov decided to go to the hospital, but the protesters grabbed the head of the district and dragged him into the crowd, punching him several times and breaking his glasses. Gavrilov escaped and fled to the hospital building.

According to the official version of events, as many as 57 children from three schools of Volokolamsk turned to doctors complaining of dizziness, nausea and other ailments. Their parents explained the poisoning with the emission of landfill gas, which took place on Yadrovo landfill site on March 21 overnight. The authorities of the region confirmed the emission, but noted that its source was liquidated quickly.

Representatives of the regional Health Ministry said that doctors found no connection between the children's ailments and emissions from the landfill. According to them, medics found no abnormalities in blood samples of the hospitalised children.