Oleg Tabakov, one of Russia's most revered and recognisable artists, died in Moscow on March 12 at age 82. Tabakov had spent the past few months at hospital. It was reported that Tabakov was sick with pneumonia. Later it became known that he was connected to the artificial respiration apparatus, but could not speak while maintaining orientation in space and time. 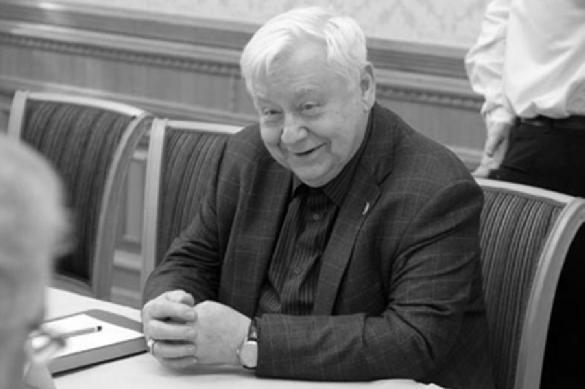 After the New Year, it was reported that Tabakov was spending most of time in a state of artificial coma.

Oleg Tabakov was a founder of one of Moscow's best-known theatres - the Sovremennik Theatre. He also served as the head of the Tabakerka Theatre, the Chekhov Moscow Art Theatre, and the rector of the Moscow Art Theatre School from 1986 to 2000.

Literally every Russian, and especially Soviet person, knows Tabakov for his remarkable performances in such masterpieces of Soviet cinematography as "Seventeen Moments of Spring", "War and Peace", "D'Artagnan and the Three Musketeers", "A Few Days from the Life of Oblomov", "Man from the Boulevard of the Capuchins" and many others. The artist is also celebrated in the country for his outstanding theatrical works. All Russian children know Oleg Tabakov as the voice of cartoon character Kot Matroskin (Matroskin Cat) from "Prostokvashino" cartoon series.

Tabakov was born on August 18, 1936 into a family of doctors. After leaving school, Tabakov decided to go to Moscow to study theatrical arts. On March 12, Oleg Pavlovich Tabakov suffered a heart attack. He died at 4:15 pm.

The same day, March 12, the world lost another famed artist, albeit from the world of fashion.  French couturier Hubert de Givenchy died at the age of 91, RFI radio reported.

The fashion designer was born in 1927. He studied at the School of Fine Arts in Paris. At the age of 25 he founded his own fashion house Givenchy, which still bears his name. The very first collection of the young fashion artist was a huge success.

Givenchy's ideal of beauty and femininity was Audrey Hepburn. Their creative union lasted for almost 40 years. The couturier created his first perfume - L'Interdit - for Hepburn as well.

The first lady of the United States and fashion trendsetter Jacqueline Kennedy was another face of the Givenchy fashion house.

According to the communique distributed in the French media, Hubert de Givenchy died on March 10 while sleeping. It was said that "instead of flowers and wreaths, Givenchy would prefer a donation to UNICEF."