Student from Novy Urengoy, Nikolay Desyatnichenko, is facing harassment on the Internet after his infamous speech at Germany's Bundestag, where he delivered a report about soldiers of Wehrmacht. Nikolay has lost weight because of harassment, Governor of Yamal-Nenets Autonomous District Dmitry Kobylkin said. 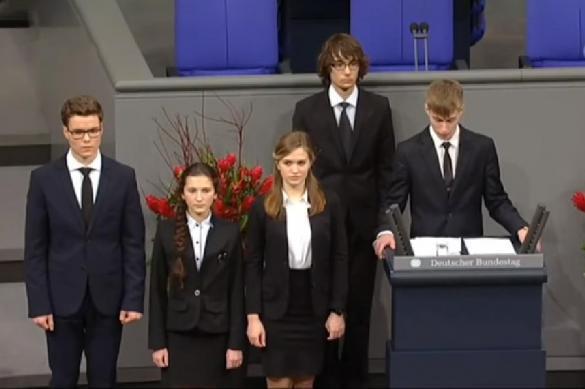 "The boy has fallen a victim of Internet bullying. He has lost seven kilograms, and it is impossible to protect him from this. The boy has not even realized that he has offended people's feelings," the governor said adding that he would not like "Russian nationalism to be born in the struggle against fascism."

The student told German MPs about his cooperation with the German Military Union on the question of the burial of German soldiers and his trip to the town of Kopeysk in the Chelyabinsk region. During his speech, Nikolay said that the graves of "innocently killed" soldiers of Wehrmacht who "wanted to live peacefully and did not want to fight" were in terrible condition.

The student's speech triggered a storm of negative reaction in Russia. Communist Party MPs sent a request to prosecutor's office to look into the wording about "innocent soldiers of Wehrmacht, who did not want to go to the so-called Stalingrad cauldron."

Commenting on the incident, chairman of the Moscow Public Monitoring Commission, the head of the Board of Directors of Pravda.Ru, Vadim Gorshenin, stated that "it is not the boy, who should be crucified for what he said, but the Minister of Education of Russia, because the son of the student's history teacher became a Bandera punitive troops in the Donbass."