An image of Russian President Vladimir Putin against the backdrop of the Russian flag were projected on the facade of one of Donald Trump's hotels. The organizers of the unusual "light show" have not ben exposed. 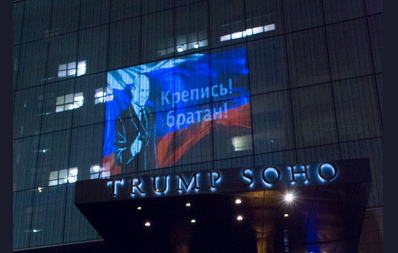 According to eyewitnesses, the projection appeared on the five-star Trump SoHo Hotel in New York City. The idea of the projection is a message from Putin to Trump: "Happy to help, bro", "Follow the money" and "Laundering services available" and also a phrase in Russian "Krepis, bratan!" which translates as "Brace yourself, brother!"

The projection appeared on Trump's building a few hours after the US special prosecutor convened a grand jury on the "Russian case." According to experts, the investigation into Russia's alleged interference in the American elections has reached a new level. Members of the Congress and the FBI are confident that the Kremlin instructed Russian hackers to break into Hillary Clinton's email,  which prevented her from obtaining the largest number of votes.