People's Artist of Ukraine, MP from the Bloc of Petro Poroshenko, ex-Minister of Culture, Oksana Bilozir, insulted Russian singer Yulia Samoilova during an interview with 112 Ukraine TV channel. Bilozir insulted the singer, who is going to represent Russia at Eurovision Song Contest in Kiev. The Ukrainian official called the Russian performer "an ugly creature" and said that Ukraine was a civilised country. 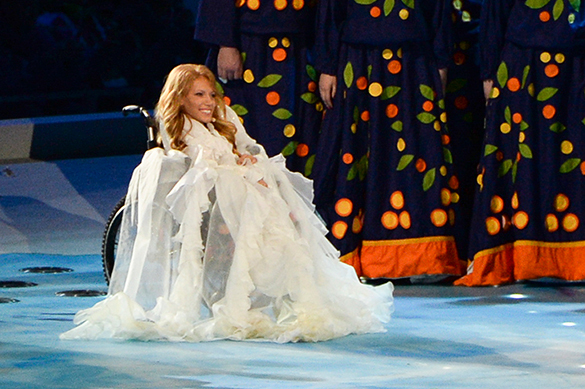 "It appears to me that Ukraine is a civilised, democratic country. We are spiritually rich and we will not politicise art. If Russia tries to send this ugly creature to Ukraine, then I'm sorry, but we can not take any positions categorically," Oksana Bilozir said, Ridus reports.

Yulia Samoilova is chained to a wheelchair. She became famous after performing at the opening of the Winter Paralympic Games in Sochi in 2014.

Earlier, adviser to the Minister for Internal Affairs of Ukraine, Anton Gerashchenko, suggested detaining Russia's Eurovision contestant. Gerashchenko said that Ukraine could let Yulia Samoilova arrive in Kiev and then arrest her. According to him, Yulia Samoilova violated the law of Ukraine by performing in the Crimea in 2015. Earlier, Ukraine's Foreign Affairs Minister Pavel Klimkin stated that  Russia's choice of Yulia Samoilova for Eurovision Song Contest was a "provocation" against Ukraine.