On November 4, at a meeting between General Director of Pravda.Ru Internet media holding, Inna Novikova, and CEO of News Agency Vesti.Az, Araz Zeynalov, a document about media partnerships was signed. 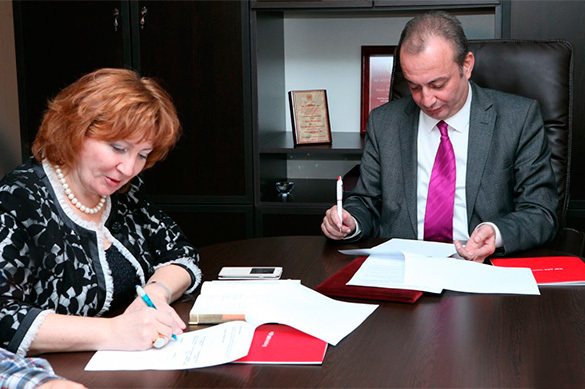 The CEOs of the two companies discussed current problems in the field of modern journalism, the influence of Russian and Azerbaijani media on the formation of political agenda and peculiarities of covering international conflicts.

During the talks, special attention was paid to the importance of the Russian-Azerbaijani cooperation in media landscape of both countries. Inna Novikova and Araz Zeynalov decided to document the partnership status and signed an agreement on media cooperation.

The agreement provides for the exchange of journalistic materials, including news, articles, videos and contact base.

Vesti.Az is a part of APA Holding. The agency started working on March 16, 2009. During seven years of work, the agency has been able to create an effective website and earn a good reputation rating among Internet media. From the very first days of operation, Vesti.Az agency won extensive attention of audiences. Exclusive materials, reports and interviews have turned Vesti.Az into one of the most popular online publications.

Pravda.Ru is Russia's first independent daily socio-political online newspaper that has developed into Russia's largest and modern electronic media outlet. Pravda.Ru has been online since January 27, 1999. Keeping pace with the times, Pravda.Ru has always kept in touch with traditions of the chronicler of the century - the Pravda newspaper.