And it starts tomorrow, Thursday, the 65th Berlin International Film Festival, considered the third in the order of global importance. The opening film, Nobody wants the night, is by the Spanish Isabel Coixet, filmed in Greenland, and tells a lesser-known aspect of the life of Arctic explorer Robert Edwin Peary, to which they attributed the discovery of the center of the North Pole. 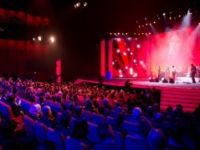 The trip of Josephine, his jealous wife, played by the French actress Juliette Binoche, in search of Peary in the Arctic where the explorer lived with a much younger Eskimo.

There are no lusoafrican movies (From Portuguese-speaking African countries), but there are the francophone The Siren of Faso Fani, by Michel Zongo, of Burkina Faso, and an English-speaking co-production, The Thieves of Boda Boda (boy bikes), bringing together South Africa, Uganda, Kenya under the direction of Yes that's Us, as well as films from Egypt and Morocco.

Brazil is not in the competition, but ten Brazilian films are programmed in several parallel sections, including a Walter Salles' documentary made in China, Jia Zhang-Ke, a man from Fenyang.Three films highlight the Brazilian Indians.

Translated from the Portuguese by