President Putin congratulates all Russians and Orthodox Christians on Christmas

Russian President Vladimir Putin congratulated all the citizens of Russia on the holy day of Christmas, the press service of the Kremlin said on January 7, 2015. 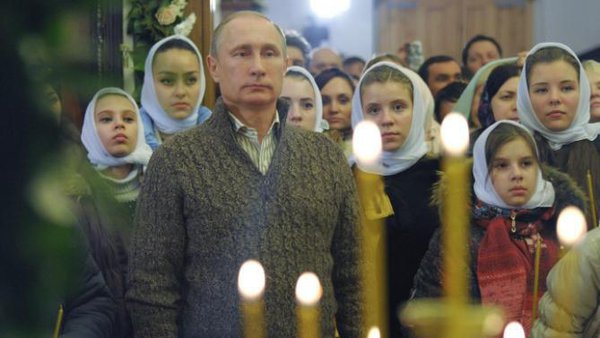 "This bright and joyful holiday is precious to millions of people. It brings us back to origins of our spiritual traditions, to ideals of love and mercy that have been serving to the unify of people for centuries and help survive in times of hardship and difficulties," Putin said in his message.

President Putin pointed out "the great and unique role in the approval of high moral principles in the society, in the upbringing of the younger generation, the preservation of our richest cultural and historical heritage, played by the Russian Orthodox Church and other traditional Christian denominations." According to Putin, "this is very extensive and important work that deserves  most sincere recognition."

President Vladimir Putin wished peace, happiness and prosperity to all Orthodox Christians and all citizens of Russia who celebrate Christmas.

On Christmas night, Vladimir Putin attended the ceremony at the Church of Protection of the Blessed Virgin in the village of Otradnoye, in the Voronezh region of Russia.