A sociological survey conducted by Levada Center about consumer preferences of Russian citizens showed that like 20 years ago, most Russians prefer to buy Russian-made food products. As for clothes, household items and electronic equipment, Russians choose foreign-made goods, Izvestia reports. 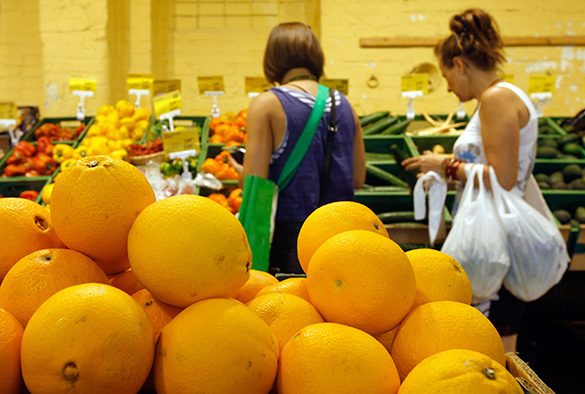 The survey embraced 1,600 people in 134 settlements of 46 regions of the country.

Speaking of the food market, the majority (44%) of respondents believe that there are more domestic goods on the Russian market than before. Only 14 percent believe that the amount of imported goods is larger. As many as 37 percent of the polled said that the amount of Russian and foreign goods on the Russian market is about the same.

As for the second group of products, which includes clothing and footwear, 44 percent say that imported clothes prevail on the Russian market. Thirteen percent said that there were more Russian clothes in Russia, and 38 percent believe that both foreign and Russian clothes and footwear is available on the market equally.

In the third group of goods (durable goods, household items), respondents also noted the increasing number of imports (46 percent). Eleven percent of the polled believe that the quantity of domestic cars, household appliances and other "long-playing" products on the market is larger, whereas 35 percent estimated the amount of domestic and imported goods as equal.

Analyzing the price and quality ratio, 85 percent of respondents said that it was better to buy Russian food products, and only 7 percent prefer imported food.

This year, the Russians prefer imported clothing (49%). However, Russian producers of clothing lose only ten percent at this point, so the gap is not very large.