Many Russians turn back on the West 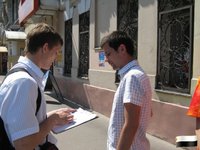 Another poll conducted by Levada Center showed that only 14 percent of Russians consider themselves as carriers of Western culture. At the same time, 24 percent of the polled Russians believe in friendship with the West.

"Most people believe that Russia already has a democracy, or, at least, needs her way - neither Western, nor Soviet one," deputy director of Levada Center, Alexei Grazhdankin said. The conflict with the West changed the attitude of many Russians to the West. Today, only 24 percent of Russians believe that relations between Russia and the West can be friendly, whereas 64 percent believe that they will always be based on distrust.