Some parents may give very unusual names to their newborn babies. In Russia,  the choice of names for babies can be very unusual too, for example, Dawn (Rassvet), Moon (Luna), or Oceana. Yet, the choice of parents from the city of Perm shocked the whole country. They called their baby boy Lucifer. 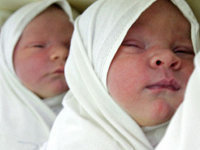 Twenty-four-year-old mother explained her choice by the fact that she and her husband  were "Satanists".

"I wanted to name him Lucian, but my husband wanted another name - Lucifer. My labor was very complicated, and I promised that if the baby survived, we'd call him Lucifer. All went well, so I kept my promise," the boy's mother, Natalia Menshikova told PRM.ru website.

Employees at the registry office tried to convince the young parents not to name the boy that way, although they had no legal grounds to decline the registration of the child's name.

"If Lucifer, when he grows up, would like to come to the church, the church will accept him. If he looks at his parents and realizes that he does not want that kind of life, we will baptize him under a different name - a name of a holy man, rather than of the devil," a local priest said.