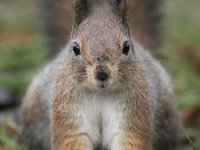 In Syktyvkar (a city in Russia's Far North), a squirrel found a hiding place, from which it stole a packet of drugs. Three students and a former police officer eye-witnessed the incident.

The curious incident took place near School No.3, Interfax reports with reference to eyewitnesses.

The teens started chasing after the squirrel that was holding a packet of drugs in its teeth. The boys were running around screaming at the squirrel in the trees. Their behavior attracted the attention of a passer-by, who turned out to be a former police officer.

The man asked the boys to leave the squirrel alone. The students explained their interest in the squirrel by saying that the rodent was holding some packet in its mouth.

The man looked at the squirrel carefully and recognized the small bundle of red color, sealed on all sides. Such packets are usually used in drug dealing business to pack doses prior to selling them.

While the people were trying to understand the situation, the squirrel seized the moment and ran away, hiding among the trees. "We couldn't catch it, so we will never know where the packet will go and where it came from," the man said.