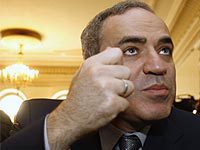 Forbes criticized former grandmaster Garry Kasparov, saying that he may well be a "chess talent," but "when it comes to politics, Kasparov often demonstrates incompetence."

The article, which was published on the website of the magazine, followed most recent remarks from Mr. Kasparov, who said that it was Vladimir Putin, who orchestrated the occupation of northern Iraq by ISIS terrorist group.

"How on earth is Vladimir Putin to blame for the actions of Islamist terrorists in another country? Does anyone really think that ISIS fighters, who first rose to prominence fighting against one of Vladimir Putin's closest regional allies, are actually waiting for cues from Moscow? Is it possible that without the annexation Crimea the ISIS high command, which has been leading a ruthless struggle against "infidels" for the past three years, would have decided that instead of jihad they'd actually organize a beach volleyball tournament?" the article in Forbes says.

"Kasparov never explained how Putin is to blame for what's happening in Iraq because it's an obviously unsupported and unsupportable position. It's a slogan ("blame Putin!") more than it is a serious attempt at political analysis," the article continues.

America does not need what Mr. Kasparov offers - a cheap slogan, the article concludes.

Political analyst Belkovsky, who is a political father of opposition activist Aleksei Navalny, said that "Kasparov is a professional fundraiser, who collects money on unrealistic projects." "When Kasparov suddenly realizes that people see right through him, when people see that he is a crook, it does not frustrate him, and he does not even believe that it could be so."