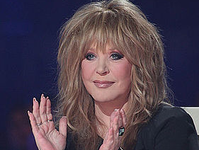 Tuesday, April 15, 2014, People's Artist of the USSR Alla Pugachova celebrates her 65th anniversary. The Russian pop diva has repeatedly said before that her biography was widely known, so she never had to hide her age.

Alla Pugachova was born in Moscow in 1949. She studied at a Moscow secondary school and then became a student of the Music School named after Ippolitov-Ivanov. At age 16, Alla Pugachova made her first appearance on professional stage with the song "Robot." Ten years later, at Golden Orpheus Festival in Bulgaria, she performed her major hit song "Harlequin" that made her "number one female singer" of the Soviet Union.

Alla Pugachova has released more than 100 solo albums and sold more than 250 million copies of them. Her concerts would always be major music events in the country. The singer is loved by millions of Russians, for whom she is a living legend, a voice of generations.

Five years ago, on her 60th anniversary, Alla Pugachova announced that she was leaving the stage, and she kept her word.