Musa. Nine months old. Accused of planning to murder the police by pelting them with stones and of attacking gas workers who were called to a residence. Welcome to Lahore, Pakistan, the capital of bureaucracy. 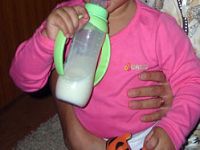 One thing is prying into the affairs of another country, another is sheer stupidity and abuse of human rights. This is the case in Pakistan where police officers who booked a nine-month-old infant on charges of planning murder have been suspended by the higher authorities.

Musa was hauled before a court yesterday where he was accused of throwing stones at police, attempting to murder them. As he cried, terrified, holding his feeding bottle, the defence and the accusation began to argue their cases for and against the baby before judge Rafaqat Ali granted the child bail. The case was adjourned until April 12.

The incident was alleged to have taken place in February, when a detail of staff from the state gas company raided the family home in Muslim Town, whereupon the workers were attacked and a police detail was called in.

The result? Suspension of the police officers who filed the case and an accusation of human rights violations. This case in no way sheds bad light on Pakistan but it does highlight the stupidity of officious officials everywhere who hide behind uniforms and abuse their authority, perhaps because they will never be in any positions of authority in their real lives when they are not wearing the uniforms.