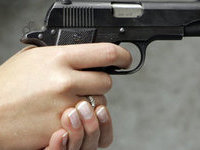 Those supporting restrictions to free arms trade in the United States hope that violence in the US will decrease with the arrival of "smart" guns on the market. The new product called Armatix iP1 is a 22-caliber, 10 round pistol that fires only with the presence of a special watch in the radius of no more than 38 centimeters from the weapon. The watch is programmed with the identification system and access code that only the owner of the gun knows.

According to local human rights defenders, the weapon will help significantly reduce the number of suicides committed with the use of firearms, as well as random gunfire incidents. Others speak of unreliability of the system and pay special attention to the high price of the gun. Armatix iP1 complete with a watch, which can be bought exclusively in the State of California, is priced nearly $1,800.

The right to purchase and bear arms is guaranteed to American citizens by the second amendment to the Constitution.