Longest suspension bridge in Latin America to be built in Chile 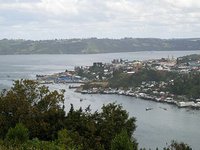 The construction will be conducted by international consortium consisting of Brazilian company OAS, South Korean Hyundai, French Systra and Norwegian Aas-Jakobsen. The works are to be completed by 2020.

Chiloe is the main island of the Chilean archipelago in the Pacific Ocean. The construction of the bridge was one of the campaign promises the Chilean President Michelle Bachelet.