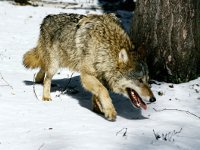 A few days after the notorious public killing of giraffe Marius in Denmark, a wolf was dismembered in front of children in the Natural History Museum, the Daily Mail reports.

The schoolchildren were invited to visit the museum on their winter holidays to ensure winter activities for children. The photographs show that some kids were excited during the dismemberment of the animal, while some others turned away in horror and buried their faces in their hands.

The wolf was delivered to the museum from a wildlife park nearby. Circumstances of the animal's death are unknown.

At one point of the gruesome procedure, a female scientist pulled lungs out from the body of the dead wolf to show children how the organs work.

The wolf dismemberment happened just a few days after the murder of Marius, a giraffe at the Copenhagen zoo. The remains of the animal were subsequently fed to lions.