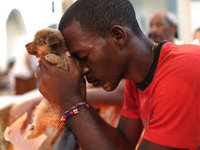 The Russian Federal Service for Surveillance of Customers' Rights recommends Russian tourists not to celebrate the New Year in the Congo, Angola and Haiti due to the epidemic of cholera in these countries.

Officials with the department said that the number of cholera cases in the Congolese province of South Kivu made up over 2.5 thousand people in July 2013. Seventeen of them died. In the Congo, over 11,500 cases were reported; in Haiti - 58,000 cases; in Angola's Cunene Province, there were more than one thousand cholera patients, 48 of whom died during two weeks of November.

For those, who still travel to the above-mentioned countries despite the warning, need to observe precaution measures. Meat, fish and seafood must be exposed to thermal treatment; vegetables and fruits must be washed with pure water.