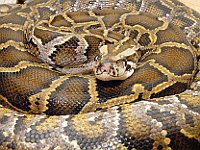 A giant python strangled and swallowed a male resident of India, who fell asleep near a liquor shop. The snake could not move after a hearty dinner.

The incident occurred in the state of Kerala, in the south-west of the country. The drunk man was peacefully sleeping near the shop, when the python approached him, strangled the man and swallowed him whole.

The next morning, local residents found the gigantic bloated python on the doorstep of the shop. People had to kill the snake to take the man's body out.