In Moscow, a woman with a child was robbed. The criminal, however, ironically obtained a smelly take in the form of a package with human excrement. 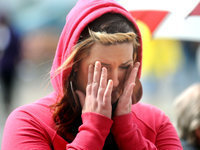 The crime was committed on Monday at around noon, near an apartment building in the north of Moscow. The woman decided not to go police, Interfax reports.

According to the victim, she came out of her home with her child and started to accommodate the child in the seat of her Land Rover vehicle.

The perpetrator approached the vehicle, and while the young mother was busy with the child, kidnapped the package from the front seat. The woman tried to catch the robber, but could not do it.

According to the victim, she was very upset about her loss, as it contained her child's stool samples, which the woman had been carefully collecting for a few days. There were no other valuable items in the stolen package.