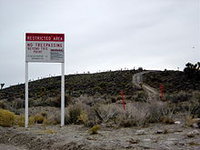 As it was said in declassified documents from the U.S. Air Force, the U.S. military studied the fighting abilities of the Soviet MiG-21 aircraft on the territory of Area 51.

American commanders borrowed the MiG from the Israeli Air Force. The tests were conducted from January to April of 1968, in Area 51 in Nevada.

American experts, in complete secrecy, were supposed to find out the combat abilities of the fighter and estimate its strengths and weaknesses in comparison with U.S. aircraft.

Noteworthy, the existence of Area 51 was officially announced only in August 2013.