All trains of Moscow subway to have Wi-Fi next year 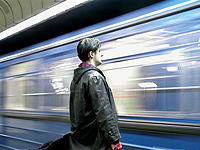 Wireless Internet will be launched on all lines of the Moscow metro by the middle of next year.

By the middle of next year, all subway cars will be outfitted with constantly working Wi-Fi, officials said. Wireless Internet spots will be available inside train cars, not on the stations.

Wi-Fi currently works in train cars of the Kakhovska subway line - the shortest one that only has three stations. The Kakhovskaya line is a link between two other lines of the Moscow subway system.