15:26
American publicist names the ultimate goal of the game against Russia
14:33
The US will close access to its technologies to the companies supporting Russia
14:29
Russian Finance Ministry refuses to acknowledge foreign debt default
14:02
Teen boy suffers severe injuries as electronic cigarette explodes in his mouth
13:26
Kremlin: Default in Russia? Not our problem
13:16
Welt: Putin prepares a new trap for the West with the help of Bolivia
12:51
Bloomberg: Russia defaulted on foreign debt for the first time since 1918
12:13
Kyiv sacrifices its citizens to protect a military facility from Russia
11:23
KillNet hackers give Lithuania 48 hours to unblock transit to Kaliningrad 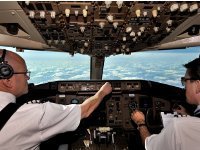 On Tuesday night, several "laser" hooligans attempted to blind pilots with laser pointers. From 23.00 to 23.30 on August 12, the laser attack affected from two to six aircraft, both Russian and foreign airlines, as they were landing at Pulkovo.

All airliners landed safely, emergency situations do not occur.

Another incident took place in Moscow's Sheremetyevo. An unknown individual tried to use a laser pointer to attack the plane en route from Frankfurt to Moscow. Police are looking for perpetrators.

Laser pointers if aimed at a person's eyes can cause temporary disturbances to vision. There is some evidence of rare minor permanent harm, but low-powered laser pointers are not seriously hazardous to health. They may be a major annoyance in some circumstances. A dot of light from a red laser pointer may be thought to be due to a laser gunsight, causing outrage and possible danger. When pointed at aircraft at night, laser pointers may dazzle and distract pilots, and increasingly strict laws have been passed to ban this.