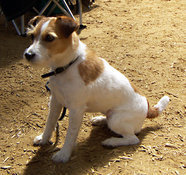 The entrenched myth saying that dogs see the world in black-and-white has been debunked. According to Russian scientists, dogs are able to distinguish other colors.

The experiment that proved it was carried out in the laboratory of sensory processing of information at the Russian Academy of Sciences. Eight dogs of different breeds took part in the test. The researchers placed paper sheets of certain colors over the bowls of animal food.

The food was placed in four sealed bowls marked with dark yellow, light yellow, dark blue and blue colors. The most delicious delicacy - raw meat - was placed in only one bowl. The animals could be guided only with the dark yellow color, which marked the adequate bowl, and the dogs picked the right bowl being guided by the color.

As a result of this experiment, the scientists established that dogs could distinguish shades of blue and yellow.