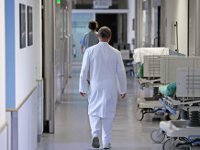 U.S. health authorities announced the distribution of a stomach infection in the country. The infection has affected 275 people in seven states, according to The Associated Press.

The Food and Drug Administration investigates cases of Cyclospore infection - a parasite that causes diarrhea and other disorders of the gastrointestinal tract.

Centers for Disease Control and Prevention said that cases of the infection were recorded in Iowa, Nebraska, Texas, Wisconsin, Georgia, Connecticut and New Jersey. Most people got sick from mid-June to early July.