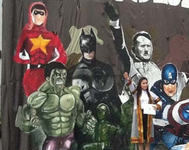 The Bangkok University named after King Chulalongkorn in Thailand apologized for a student who drew Adolf Hitler among comic book superheroes. Representatives of the university promised that such tricks would never happen  within the walls of the university again.

A comical image of Hitler appeared in front of the Faculty of Arts on the even of the graduation ceremony. The poster attracted the attention of human rights activists from Simon Wiesenthal Center.

As punishment, the student was reprimanded.