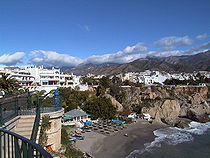 A family of three committed suicide in Spain's Costa del Sol. According to Sky News, the tragedy occurred due to the physical and mental disorder of the family's child.

The bodies of a man, a woman and their daughter were found on the site of the tragedy. The family left a note, which allegedly said that they could no longer put up with their daughter's physical condition. According to preliminary reports, the man was identified as Philip Wood, a Briton. His wife, Sheila, and their daughter Sophie were natives of Ireland.

Police officers believe that one family member shot the two others and then self from a pistol. The family had been living in the region for a long time. Sky News did not specify what kind of disorders the daughter had. Most likely, it goes about Down's syndrome.