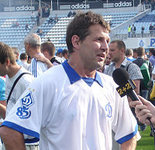 While analyzing one of the matches of the 19th round of the Ukrainian championship, Salenko, who acted as an expert in the program, suddenly lost his balance and fell on the floor. Co-hosts Sergei Panasyuk and Vadim Yevtushenko pretended that nothing happened.

Salenko later said that the mishap occurred over a mild leg injury that he had  received the day before the broadcast. "A trauma, because I was running yesterday," he explained after the fall.

However, numerous comments appeared on the net soon afterwards, in which people were accusing the footballer of drinking on his job, said atn.ua. Many wrote that it was not the first time when Oleg was getting thickly on the air, but he could stand on his feet.

Oleg Salenko played for the Russian national team and became the top scorer at the 1994 World Cup along with Bulgarian Hristo Stoichkov - they both scored six goals. In addition, Salenko holds the record for the number of goals scored (5) in one match in the history of world championships. He made the penta-trick during the game against Cameroon (6-1).

Salenko had also played for such famous teams as Zenit, Dynamo Kiev, Valencia and Rangers.