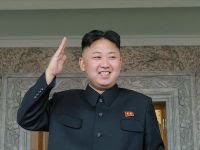 Basketball player Dennis Rodman, who has recently visited North Korea, was evicted from his hotel for the stories that he told about Kim Jong Un. According to Western media, on March 3rd, Rodman was staying at the bar of Times Hotel telling his stories about "the good guy Kim Jong Un" for several hours. Rodman was also saying that he wanted to speak about it to Barack Obama. In addition, Rodman was waving the dictator's manifesto, saying that everyone should read. To crown it all, he did not let anyone speak of repressions in North Korea.

As a result, the hotel administration evicted Rodman, and he went to Marriott hotel. The basketball player said that he had to move because guests would  constantly photograph him. In addition, he claimed, Marriott was closer to the airport.

Last week, Rodman became the first American, who was allowed to have a personal meeting of Kim Jong Un. The meeting was held at the basketball game between the North Korean and American players, Harlem Globetrotters, in Pyongyang.