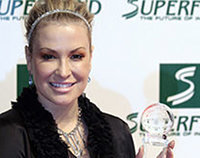 American singer Anastacia said that doctors found another cancerous tumor in her body. The singer wrote that on her official Facebook page.

The singer was very upset with the news. Due to the recurrence of the terrible diagnosis, she had to cancel her new tour It's A Man's World Tour. "The fact that I have to disappoint them (fans), breaks my heart," the 44-year-old singer wrote.

In 2003, Anastacia was diagnosed with breast cancer. She canceled all her concerts and studio work for the time of the treatment. She underwent surgery and chemotherapy, after which doctors announced that the singer won the battle. However, in the course of another examination it became known that the disease had not receded.