In the Amur region (Siberia), a man miraculously survived after falling out of a train. The man had to run in the cold for seven kilometers to the nearest station in some flip-flops and T-shirt. The unfortunate passenger was wearing only flip-flops and a T-shirt. 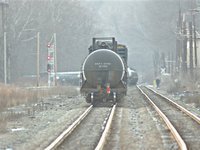 The incident occurred in the Amur region of Russia. A resident of Bratsk was traveling in a night train on route Moscow-Neryungri. He went for a smoke in the vestibule. Coming back, the man mistakenly opened the door of the tailgate nonworking vestibule, which was unlocked for some reason.

Having stepped into the darkness, the man fell out of the train and found himself on the tracks in the middle of taiga. The temperature was nearly -40 Centigrade. However, 42-year-old Siberian man did not panic. Dressed only in a T-shirt, sweatpants and flip-flops, he ran after the train. Needless to say that he could not catch up with the train.

However, the man was able to run on the tracks to get to the nearest station, where he received help. He had to cover a distance of about 7 kilometers. The life and health of the courageous passengers is out of danger.