Former Finnish President Tarja Halonen, will soon see the kitten that was gifted to her from the Russian Prime Minister. Dmitry Medvedev promised to give Halonen a kitten during his visit to Helsinki in mid-November last year. 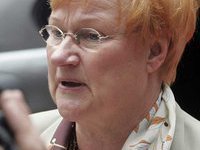 The ex-president will receive the kitten from the Russian ambassador to Finland. The cat of Neva Masquerade breed is now four months old.

Tarja Halonen is a long-time fan of felines. In July 2012, she lost one of her pets: the animal named Miska died of cancer. Now the former head of state has one cat left - 17-year-old Rontti.

Noteworthy, the world's most famous Neva Masquerade cat - Dorofei - has been Medvedev's pet for eight years. The wife of the prime minister took a kitten at a suburban animal shelter in 2001. However, the pet died in three years, and the family began to look for a new one. This is how Dorofei appeared in the house. The pet cost a thousand dollars.