Man dies from eating 28 raw eggs in a bet

In Tunisia, a local man died after he had eaten 28 raw eggs in a bet with his friends. 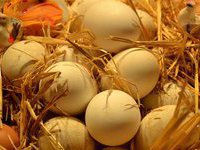 The incident occurred in the city of Kairouan, in the northeast of the country. Dau Fatnassi, a 20-year-old man, concluded an unusual bet with his friends. The amount, for which the man agreed to risk his health is unknown, Tunisian radio Shems FM said.

Severe pain appeared in the man's stomach immediately after he had swallowed the eggs. His friends called an ambulance. However, doctors could not help the egg-eater - he died on the way to hospital. More details of the cause of death are being investigated.

A similar incident occurred in October in the U.S. A 32-year-old man, Edward Archbold, ate cockroaches instead of eggs. The man ate the insects at a special contest, rather than a friendly bet. The tragedy took place in the course of the competition, organized by Ben Siegel Reptiles store in the town of Deerfield Beach.

Under the terms of the contest, the winner, who managed to eat the largest number of cockroaches in four minutes, would get a python as a reward. Archbold ate dozens of cockroaches and was declared the winner. Immediately after the announcement, he lost consciousness and collapsed.

He was rushed to hospital, but paramedics could not save the man. As it was later established, the man died because his airways were clogged with body parts of the arthropods.