Russian woman delivers baby girl while staying in a coma

A unique incident in the world of medical practice took place in Russia's Ufa. A woman, who slipped into a coma a few months ago, gave birth to a healthy baby girl. The woman was still in a coma when the baby was born. 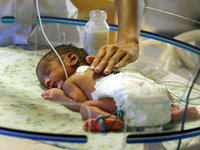 The 34-year-old patient was admitted to the Republican Hospital in a coma. Due to the arteriovenous malformation of cerebral blood vessels, a hemorrhage occurred with the formation of large hematomas. Doctors later discovered that the woman was 17 weeks pregnant.

In such cases, as a rule, medics decide to terminate pregnancy, but the doctors of the Ufa Hospital decided to keep the woman's baby. The woman was staying in the intensive care unit for 111 days. She received proper care and even brain surgery.

The pregnancy was developing without complications, and on due date a baby girl was born by Caesarean section. The baby girl weighed more than two kilograms. Interestingly, the woman came out of the coma after the birth of the baby. The mother and daughter are fine