In spite of the fact that Orthodoxy is still the largest mass religion in Russia, the number of Christians in the country has dropped by six percent in the country during the recent three years - from 80 to 74 percent. 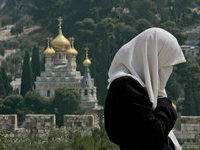 According to Levada Center, the percentage of citizens practicing Islam has increased from four to seven percent. The number of those who do not ascribe themselves to any religion has grown too. Three years ago, there were eight percent of such people. Nowadays, the number has grown to ten percent. The number of atheists has dropped by one per cent - there are five percent of them.

The survey also found that the percentage of Orthodox believers who attend the church is 76 percent, which means that one in four believers does not go there. A third of respondents go to the church to light a candle and pray. Twenty-nine percent attended christening, wedding or funeral ceremonies.

Most believers go to the church once a year or a little more often; 20 percent have never even been there. Interestingly, 61 percent of those who identify themselves as Christians have never held a Bible in their hands.