A journalist from Krasnoyarsk, Vyacheslav Ledovsky, surprised many with quite an original prank. The journalist ate his article that he had penned two years ago, thus proving that he did not talk to the winds. 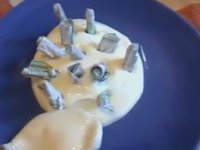 The journalist of The Builder newspaper wrote an article in 2010 entitled "Promises are made to be broken". In the article, the journalist cast doubts on the words from the governor of the Krasnoyarsk region, Lev Kuznetsov. The governor had promised to implement the plan to start the construction of a new bridge across the Yenisei River before 2015.

Ledovsky wrote two years ago in his article that if he was wrong in the forecasts, then he was ready to eat the article. Two years have passed, and it became known that the construction of the bridge had begun indeed. The journalist also kept his promise and ate the wrongful article, in which he wrote that he was certain that it would take a lot more time than two years to give the construction a go.

"It is often frustrating to do what you promised, but you either do not make promises, or just do it," said the journalist before his "meal."

The man cut the newspaper publication into pieces, seasoned the article with sour cream and ate it. Ledovsky filmed the process and uploaded the video on YouTube. In five days, the video received over 3,000 views. "You should have eaten the entire print run," someone commented the video.